We must do three things this recess.

Today, tens of thousands of Indivisibles and progressive allies are showing up at more than 700 events nationwide to demand an end to family detention and to demand the reunification of families separated at the border. Use this recess to show up at your MoC’s offices and tell them: families belong together, and free!

After you march this weekend, there are 62 (!!) #endfamilyseparation events and 48 town halls on our on our events map here. MoCs will be home until July 9 so there’s still time to plan and register an event on our map if there isn’t an event near you. We have a handy organizing toolkit to help you pressure your MoCs to make a verbal commitment to end family separation.

Wednesday, Justice Kennedy announced he would retire from the Supreme Court — and already GOP leaders are whipping votes for Trump’s pick. We won’t sugarcoat it: if Trump gets his appointment, we will see attack after attack in the courts to undo decades of legal progress.

We have a (narrow) path to stopping Trump’s nomination: all Democrats must reject any nomination and two Republicans must join them (read the strategy here).

Read our resource to learn how to use local public events to get facetime with your Senators while they’re home for the 4th of July. The ask for ALL Senators is the same: they must commit immediately to opposing anyone that Trump nominates from his shortlist. New Yorkers: pressure Minority Leader Chuck Schumer to hold Democrats together.

Election after election, we’ve shook districts, created major upsets, and moved primary candidates forward that were once deemed “too progressive” or “unwinnable.” And the biggest victories are still on the horizon — but only if we get organized right now.

It starts with holding your members of Congress accountable. Make sure they know you’re watching, and you’ll remember how they voted when you head to the voting booth in just 5 months. Let them know that November is coming — so get with your constituents, or we will vote you out.

Join your neighbors every Friday @ 11:30
Carpool from Saugerties

Each week people opposed to Congressman John Faso descend on his office to voice their complaints at Faso Friday. We stand outside his Kingston office at 721 Broadway with signs expressing our views on issues from health care, immigrant rights, income inequality to climate change and more.
Often the activist band, Tin Horn Uprising, keeps us waving our signs or swaying in time to their music.Come join us and make your voice heard.Faso Friday began on January 27th 2017 and continues weekly from noon to 1:00.Meet up at 11:30 a.m.  Each Friday we will be carpooling from Simmons Plaza on 9W south  (by IXL gym and Rite Aid). 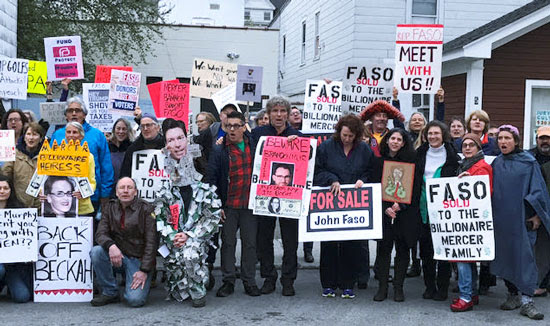 The date on which 33 senate seats, all 435 seats in the House of Representatives will be up for re-election.November 6th, 2018